THE CHRISTMAS NUMBER OF HOUSEHOLD WORDS. In: The Saturday Review, December 26, 1857 »

For some years past, Mr. Dickens’s Christmas Books have been superseded by the issue of an extra number of Household Words, containing either single tales or a collection of short ones. Some of these have been singularly and most deservedly successful—others less so; but, on the whole, they have been very favourable specimens of the best style of their author. Whether the number which has just appeared is entirely from Mr. Dickens’s pen, or whether it is due in part—as one of our contemporaries has stated—to Mr. Wilkie Collins, it deserves cordial commendation on very high grounds. Like most other novels, it has, or rather it involves, a moral; and the moral is, we think, very opportune, very sound, and inculcated with great judgment and good feeling. It would be hardly possible, at such a time as this, for a man who is in the constant habit of addressing his contemporaries not to allow his writings to be coloured by the great event of the year which is just closing. The Indian mutiny must in some way or other affect almost every medium by which men communicate with their fellows. It presents, however, a serious difficulty to those whose peculiar talents lead them to address themselves to the lighter and more festive sides of life. There are subjects on which we could not bear the voice of the charmer, charm he never so wisely. Years, perhaps a whole generation, must pass away before it would be otherwise than an indecency and an insult to make the great tribulation through which our countrymen have passed the theme of a novel. We must not botanize over those sacred and blood-stained graves. We must not convert into literary stock in trade the letters which so lately filled the columns of our papers, and which, though given to the world at large, were as awful as the last words of a dying friend. The Bible itself would be scarcely less fit for the purposes of a novelist than the Indian mutiny.

True, however, as this may be, it is no less true that the incidents of the past summer must excite in the most powerful manner the imagination of every one who is gifted in any considerable degree with the poetic faculty. Whatever may be the horror with which the circumstances of the revolt were invested, they must have produced feelings of exultation in every Englishman which naturally seek for an adequate expression through the channels which are at the disposal of the person who entertains them. The author of the Perils of certain English Prisoners has, we think, shown great judgment and good taste in the mode which he has adopted of expressing his own feelings without wounding those of his readers. He is deeply impressed with the heroism of which India has been the scene, and he celebrates it cordially and warmly; but in order to avoid the mistake to which we have referred, he lays the scene of his story, not in India, but in Central America, and in the year 1744, instead of 1857. It is, however, impossible not to see that, though the venue is changed, the parties are substantially the same. The treacherous Sambos, half-negro half-Indian, too much petted and trusted, are the Sepoys; the persons employed about the silver mine are the civil servants; and the soldiers and the women stand in a position analogous to that which they occupied in the Indian revolt. The story is told by a certain private of marines, who, when he goes out, cordially despises the delicate ladies aud elegant gentlemen to whom he sees the management of things entrusted, and he is taught by the course of events to respect them for their fearlessness and hardihood. The moral is, that the various classes of society should learn to respect and like each other, and that the sad events which we have so lately witnessed ought to make us feel the various bonds by which, notwithstanding great and deep distinctions, all fellow-countrymen are connected.

To preach such a doctrine is surely one of the best services that a novelist can render to society. It is easy to forget and to deny it; and the forgetfulness and the denial involve consequences of the very deepest importance. We have on former occasions strongly expressed ourselves on the harm which Mr. Dickens did by sweeping and unjust denunciations of whole classes of the community. We gladly embrace the opportunity which the present publication affords of showing that our feelings and opinions upon the subject were based upon principle, and were not the result of any petty personal malevolence. Mr. Dickens now joins emphatically, though indirectly, in acknowledging the merits of the Indian Civil Service, for the isolated character of the foolish Governor is so extravagant and obvious a caricature that it does not alter the general effect, though it impairs the unity and interferes with the action of the story. We would ask Mr. Dickens to reflect a little on the consequences of this admission. Under the pressure of the most awful catastrophe that ever befel a great political system, the members of the most powerful and extensive administration in the world have behaved in a manner which has procured for them unanimous admiration. What were these men like before the outbreak which only revealed, but certainly did not produce, their courage and capacity ? They had all the weaknesses, all the foibles, all the external appearance of harshness and prejudice which could be found at home. An Englishman, or a class of Englishmen, can always be made the subject of caricature. Our very virtues are to a certain extent ungracious and ungainly. Partly from a constitutional indifference to the opinions of others, partly from an equally constitutional pugnacity, partly as a defence against the ceaseless and unsparing criticism to which they are exposed, people who fill public positions of whatever kind are apt to assume a harsh, dry official manner, which is certainly neither amiable nor promising. We do not defend such behaviour. It is a pity that it should be so common, but we do say that the history of the Indian mutiny shows—what an attentive observer of human nature ought to have known without it—that this manner is by no means an infallible proof either of incapacity or of indifference. The gifts of morals and of intellect which are most common in this country are not very easily detected. People aim so little at display that the ablest men would frequently appear mere blockheads to a casual observer. It would require no great acquaintance with society to name persons who are entitled by universal consent to the praise of first-rate ability, and who manifest it to the outside world principally by a great capacity for sleep, silence, and commonplaces. We have men amongst us who could not write a newspaper paragraph, or make a speech ten minutes long upon any subject but their own, without endless confusion and obscurity, but who could also try men for their lives without misstating or misunderstanding a single link of the most intricate and lengthy chain of facts. From the days of Mandeville to those of Mr. Thackeray, it has been a sort of commonplace to wonder at the number of heroes which every war discovers under the appearance of mere effeminate dandies ; and it is no less true that an outside of parchment and red tape frequently conceals the sort of knowledge, vigour, and resource, which the Company’s civil servants have displayed so abundantly during the events of the last six months.

We are glad to find in the tale before us an acknowledgment of at least one manifestation of these truths. That people are not so weak and inefficient as they seem at first sight, is the moral which the narrator of the story is made to draw from it. We hope that the author, or at any rate the editor, will adopt it also. It is to his geniality—a much abused word, which we suppose to mean enjoyment of what is worthy of admiration and affection—that Mr. Dickens owes his long-continued and wide-spread popularity. We would beg him to try to extend its bounds. It is not worthy of a man who exercises so much influence over his generation to allow himself to be caught by mere glaring theatrical virtues. He should seek out those which are somewhat unpicturesque and unamiable, and teach his readers that they too are worthy of respect and sympathy. Poets should not confine their songs to Agamemnons. Every one is ready enough to praise them; but few people recognise the fact that they are only samples of the society in which thev are bred, and that the heat, the dust, and the turmoil of everyday life furnish the training by which they are made possible. It is no doubt true that, in the mine which we wish to see worked, the ore is much encumbered with dirt and dross; but that would only increase the merit of the man who could discover and exhibit its inherent richness. The soldiers and civilians whose heroism we are all agreed to admire, differ only in their circumstances from the bulk of the military and official classes. They were very commonplace people a year ago. They will be equally commonplace a year hence; but, in the meanwhile, “those good yeomen, whose limbs were made in England,” have given us all a right to say that any Englishman you meet may be a hero. Popular novelists are, perhaps, our most influential preachers; and there is no doctrine which they ought to impress upon themselves and their readers more carefully than that of respect for goodness, whatever coat it wears. Nor can they diffuse any piece of information much more important than the fact, that goodness has a large and rather a homely wardrobe, and that it generally prefers the common dress of its own time and country to the crimson and gold of a theatrical hero, or the picturesque properties of a melodramatic pauper. 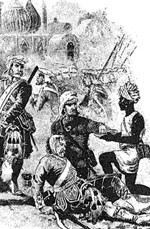 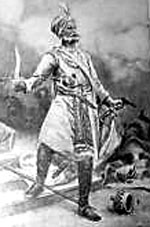