The Illustrirte Zeitung was the first illustrated newspaper in Germany. It appeared weekly and was published in Leipzig from July 1843 till September 1944. During 1857 it carried reports on the events in India in all issues from July to December. It additionally published a number of feature articles, some of them with large illustrations.

1 Modelled on the Illustrated London News and the Illustration (Paris), Germany’s first edition of an illustrated magazine was published by J.J. Weber in Leipzig in 1843. Having served as the flagship for all «pictured papers» that were to appear later, its work can be seen as a courageous and daring attempt in an otherwise rather unfavorable time, an experiment which, even though it was an «expensive enterprise», nevertheless worked out and developed into an excellent bestseller.

While Die Gartenlaube – the more famous and somewhat smaller counterpart to the Illustrirte – functioned as the classical «Friend of the family» and «aide», the «Illustrirte Zeitung» from its very beginning focused on a much broader field of topics. It offered «weekly news about all events, situations and public figures of the present, about daily affairs, public and social life, science and art, music, theatre, and fashion». Indeed, no other periodical, when looked at it as a whole, offers such an amount of material, which would become clear if one considered that a detailed main index alone would cover several volumes.

«Our intention is to bring culture to various places and to broaden and intensify the familiarity with events of the states and the nations, with arts and nature, with all kinds of remarkable occurrences in general. The most detailed accounts can only be half understood without having a picture of the locality of where they happened in mind. Only if one can see a truthful picture of the maps, plans, buildings, landscapes, works of art, machines, tools, in one word the objects that are being written about, does the understanding of things become clear and will stick in one’s mind. Even public figures whose biographical outlines we give, will become more familiar to the reader if he can actually look at their portraits.»

The enormous use of pictures and picture stories (the magazine employed its own photojournalists) turns Die Illustrirte Zeitung into a hardly exhaustible source of materials about history and art as well as politics and everyday life.

It is interesting to examine how the rise and success of Nazi Germany was accompanied by «positively» aestheticizing illustrations in Die Illustrirte Zeitung. After 100 years of publication, the magazine ended with its 5,041st issue in September 1944.  [Harald-Fischer-Verlag] 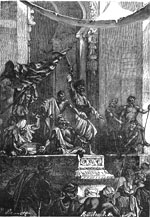